On the third Saturday of February, sound and music will take over the RIBOCA2 workshop. A great opportunity to meet the RIBOCA2 participant – American experimental cellist Jacob Cohen and to partake in an improvised musical workshop lead by him. With Jacob's guidance, we will create unusual musical instruments out of all sorts of objects and materials. Participants are welcome to bring their own musical instruments, including damaged and muted ones. Let's become a part of a musical experiment – an improvised performance, and possibly even create a new collective composition!


Since 2011, Jacob Cohen has performed at New York Subway stations, producing original cello music every day for a live and ever-changing audience. With his street performances, Cohen has traveled to Southeast Asia, Japan, Thailand and India, and in 2014, he created the Cello Without Walls project, where he performed and led master classes in Northeast US prisons. A year later, the musician received a grant to create a youth music program for the world's largest prison complex, the Raiker Island. Cohen has repeatedly collaborated with Polish sculptor Pawel Althamer, and both artists will be hosting an interactive installation at #BRIBOCA2 this year.


Workshops are organized every Saturday from 11:00 to 14:00 until 9 May, free admission. All workshop materials will be provided, including non-toxic theater colors for kids’ safety. 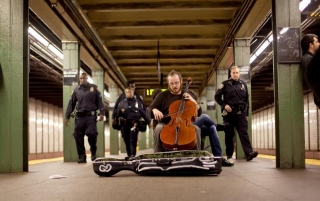