DJ evening with Nastya Volkova and Anton Monk on September 12

On September 12 we will listen to downtown music with DJ Nastya Volkova and Anton Monk, our Wine Shop&Cafe will take care of wine selection and Street Food stalls will prepare dinner. Entrance from 7 PM, free of charge.

The search for N.Volkova (Nastya Volkova) began with the study of various musical genres. Having researched many genres, Nastya felt the lack of the ideas and soul in current electronic music. Becoming a resident of Come-In Cultural Center, she organizes a series of music podcasts called VAP and conducts experiments with the combination of electronica and live instruments (such as trumpet, flute, harp, didgeridoo and djembe). As a result of all the experiments she finds multicultural downtempo and finally stops her search. Combining everything she has been looking for for so long - this genre presents the soul of live instruments and the vibe of electronic music. From this point she organizes a new promo team Tribe and a series of events Ritual by Tribe. Being the chief of this team, Nastya also performs at various venues of Moscow and St. Petersburg in Russia, as well as European and Asian festivals and events.

Nastya calls her music style as organic vibes. It's downtempo up to 115 bpm. In the mixtapes, she sends the listener to travel around the world, each time revealing its new facets.

Anton Monvol is a well experienced dj and producer, who has been performing at the lots of venues and festivals around Europe. He has a unique taste of music and a way to mix and perform. He produces different genres of music starting from the very meditative sounds and ending by the craziest drops of techno and break beat. For his dj sets he carefully picks the most quality sounding treasures. 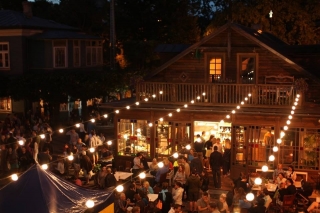